Situated in the Loir-et-Cher (Loire Valley region), Baillou is a small, historic town located in central France that is approximately 149 kilometers from Paris. Notwithstanding its small size, it is home to some of the most impressive historical sites in the region. 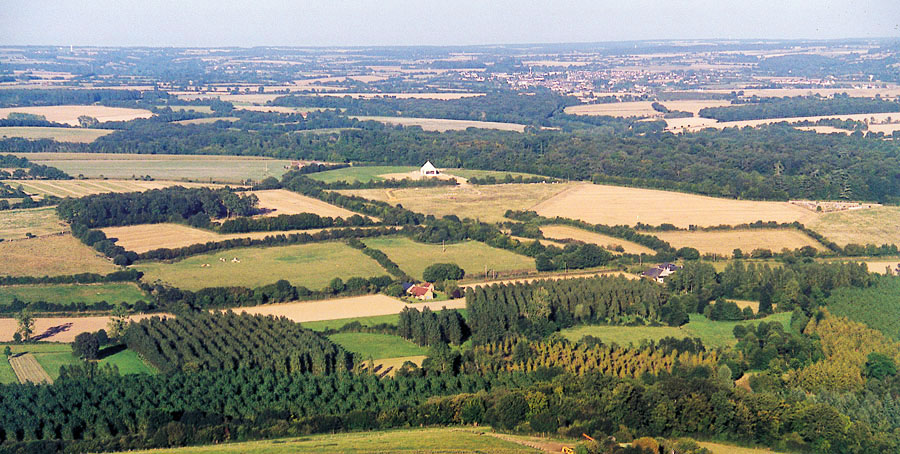 In the years 1000-1010, the lord of the region of Vendôme, Hugues Doubleau, who gave his name to the town of Mondoubleau, had this powerful fortress built with flint and “roussard” stone. With its enormous dungeon measuring 33 meters in height, it is the largest fortified castle of the “Perche vendômois” region.

The Commander’s Residence at Arville

Marked by the proud frontage of a medieval church and flanked with a fortified door and an impressive ensemble of ancient buildings, including a pigeon house, a bakery and a vast barn, the Templar commander’s residence at Arville was a farming, military, judicial, and religious establishment founded by the Templars in the early 11th century. The “Communauté de Communes des Collines du Perche” has created 8 scenes that recall the crusades and destiny of the Templars; the whole site can also be visited.

Located in the canton of Perche Vendômois, Droué has a buffing wheel dating back to the Neolithic period that was declared a historic monument in 1887. In the midst of a verdant and pleasant site, the wheel is the most important one known in France and measures 2.5 meters in length and 2.10 meters in width. Its surface bears a series of more than 25 grooves measuring 20 to 40 centimeters in length.

The church consecrated by Saint Julian at the beginning of the third century, of which nothing remains, was raised up again at the beginning of the 17th century by the sires of Coutance, lords of the area. The choir, the transept, and the two lateral chapels are vaulted and made of stone, featuring prominent and prismatic arches; the sole vault of the nave is made of wood. Stained glass windows, on which the coat of arms of the founders is depicted, decorate the choir and chapels.

The Church of Saint Martin at Sargé sur Braye

The Grenne and the Braye flow through Sargé sur Braye. The older of two churches, Saint Martin dates back to the 16th century. A “caquetoire,” which is quite rare in the region of Perche, decorates its façade. The church is also remarkable in terms of its mural paintings, one of which depicts Christ attentively watching over some men at work in a series of twelve paintings.

One of the three castles of Sargé, the Castle of Radrets is built upon quadrilateral pits that still feature 3 of the original bastions built in the 16th and 17th centuries. The castle is linked to an ancient 14th century manor by a long drawbridge dating back to the 16th century. Inside, several rooms bear witness to the defensive architecture of the ancient fortress and the prominent bonding of “roussard” stone. The castle is open to the public from June 2nd to September 3rd.

The Saint-Pierre Church of Souday

Only a section of a wall remains of this church, which is said to have been built by Saint Aldric in the 9th century. At the end of the 11th century, the monks of the priory of St. Pierre de Souday undertook the church’s reconstruction. The ogive choir was built between 1520 and 1540, and the front of the altar is listed as the 12th century statue of Saint Barbe. The stained glass windows of the choir, the crown jewels of the church, date back to the 16th century. On the wall of the choir, a fragment of a mural painting is thought to be a section of an entire panel dating back to Henri II.

The Church of the Temple

Initially belonging to a group of Templars in the 11th or 12th century, this church still has its original nave and bears a shield with the Maltese cross on its western façade. The choir, which is as wide as the nave, was rebuilt in the 13th century. The high roof, the square bell tower beneath which lies a chapel covered with a ribbed vault, and several sculptures date back to the 16th century.