Malak Jan lived a life of utmost simplicity, while using her modest resources to ameliorate the conditions of her fellow beings, especially the local inhabitants in her native village.

Not only did she use the majority of the modest income from her lands, which she had inherited from her father, to assist her fellow villagers, she even provided daily meals to some of them in her home. Yet these altruistic acts never led her to impose her convictions and values upon others. Though exacting of herself, she demonstrated tremendous patience and forbearance toward others, gently awakening the desire to progress within them. For many years, she diligently worked toward the advancement of women’s and children’s rights and the dissemination of ethics. Her motivation for this endeavor was purely altruistic and was intended to improve the morality and well-being of her fellow villagers. Gradually, her spiritual insight and altruism spread beyond the boundaries of her village and people traveled great distances to see her and to benefit from her clairvoyance and grace.

Malak Jan had a subtle sense of humor and a joy for life. She remained fully aware of the concerns and demands of her time and stayed informed of current affairs and world events. Though she was blind and lived in an environment where women were traditionally deemed to be second-class citizens, her indomitable and charismatic spirit led her to be held in the same, if not greater, esteem as men of great spiritual stature. 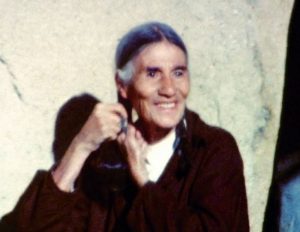 Her innate nature was such that she could not remain idle for a moment. She was so independent and self-reliant that in spite of her blindness and the frequent offers of those around her, she would not permit anyone to tend to even the slightest details of her daily life. On the contrary, it was she who would teach the women in her village to cook, sew, knit, and so on. Though she never married nor had any children, on the basis of her in-depth knowledge of human nature, she would instruct women on the correct methods for raising their children. By devising an innovative embossed script, she would write down important details pertaining to her life, including personal household expenses and the accounting of her farmlands.

Malak Jan was never willing to burden anyone. Despite the fact that numerous individuals were always offering their assistance, she would not allow anyone to help her with her household chores—either she would tend to them herself, or she would arrange to pay for them. She was extremely strict on this point to avoid infringing upon anyone’s rights. Her constant quest to establish equilibrium and observe rights manifested itself through a resolute will and firm discipline in every aspect of her life: Materially and spiritually, individually and collectively, physically and mentally, such that she came to exemplify the adage, “no excess, no deficiency.”

A skilled musician, Malak Jan played the tanbur and the setar with a distinct and delicate touch. In her youth, she had composed poetry describing the challenges and vicissitudes of the spiritual journey. Students on the spiritual path have used, and continue to use, these poems in their individual and collective prayers.  Her thirst for knowledge was seemingly insatiable: she regularly studied history, geography, law, biology, psychology, and literature, especially the poetry of Rumi and Hafez. Like her father and brother, she never showed any interest in politics, despite staying abreast of current affairs.

In accordance with Ostad Elahi’s instructions, in the 1960s she established informal classes intended to guide women and to introduce others to ethics and spirituality. Through the example of her own life, she showed how one could practice natural spirituality, which is founded on reason and comprehension, in the context of an ordinary life. In doing so, she viewed every challenge as a test for the development of the soul, and emboldened those around her not to flee from the challenges of life, which have the potential to be highly beneficial from a spiritual perspective. She always used to say: “The soul matures through adversity, not complacency and comfort. We must endeavor to realize our aspirations,” an undertaking that she did not neglect for even an instant.

She considered herself first and foremost as a student of Ostad, and adopted the work ethic of a diligent student throughout her life. As such, she had no reservations about sharing her spiritual lessons and experiences with others, even the most daunting of them. These experiences illuminated the twists and turns along the spiritual journey for other students. Indeed, it was these same peaks and troughs that produced a Sheykh Jani about whom Ostad would say in June of 1964, “My sister Jani Jan . . . is at the threshold of Perfection.” Later, he would remark, “Jani and I are but one soul in one body.” Perhaps the full meaning of this saying only became evident when she assumed responsibility for Ostad’s path after his departure.

The classes that Ostad Elahi had entrusted to Sheykh Jani have continued since her passing. The residents of her native village, who have dubbed it “the village of philosophers” due to the presence of so many spiritual luminaries, have continued these sessions with regular discussions on topics that Sheykh Jani had broached, including the nature of our rights and responsibilities, the subtleties of divine justice, the interplay between free will and determinism, and the acquisition of virtues.

Not only did Malak Jan observe and implement the ethical and spiritual teachings she had learned from Ostad, but she was able to do so in a truly archaic environment that was not yet prepared for such teachings, without diminishing her spirit of altruism and compassion in the least. Therein lies her true genius, and perhaps her greatest miracle of all.